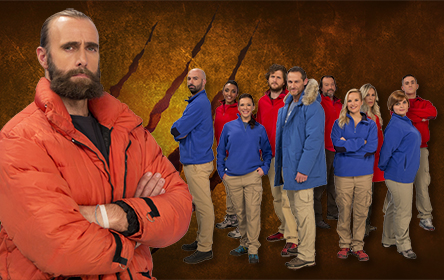 Bang in the centre of the Iberian Peninsula, on the 40th parallel north, we find the region of Madrid and the land of wolves. This is where ten contestants from Madrid (five men and five women), split into two different “packs of wolves” and have to push their limits in the wilderness to become real wolves: strong in their solitude yet showing solidarity when back in the pack of wolves.

This is what it takes to be able to stay on at “40 Degrees North”, a survival reality show presented by Telmo Aldaz de la Quadra-Salcedo and produced by Pulso TV(Grupo Secuoya) for Telemadrid. The viewer will be exposed to extreme situations while discovering the richness, diversity and landscape of an emblematic area of high ecological value: The Northern Madrid Sierra.

At each stage, in addition to completing a mountain route several hours long, contestants will have to compete in four additional tests: the immunity game, nominations, communication and the duel.
In mountains that can be up to two thousand metres in height, in some of the most rugged and unspoilt areas of the Madrid region, the ten participants will find themselves in forests and deep valleys among wild animals, such as wolves. They will have to fight to reach the final victory and become the alpha wolf of the pack. There will be eight stages during the first stage, and each one will start with a three-hour trek in the mountain, followed by four more tests: the immunity game, nominations, communication and the duel. Added to this is the hard test of having to live together on a daily basis.

The hardest and most physical test is the first one, during which two groups of contestants fight to win immunity, which will allow them to move onto the next stage without having to expel any member. However, during the next stage, the team that lost the previous round has to decide which contestant to send away from the “pack of wolves”. The nominated team member will be able to save himself by fighting in a duel with a member from the opposition team.