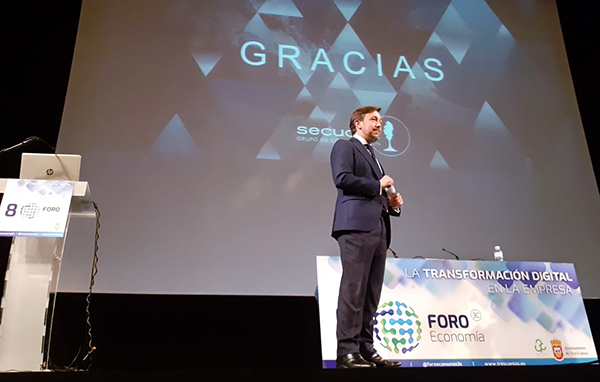 The CEO of Grupo Secuoya, Mr. Pablo Jimeno, has participated in the 8th Economic Forum organized by the Department of Economic Development and Employment of the City of Tres Cantos

Jimeno focused his participation in the employment and development opportunities which involves both the landing of the Company in the town, as well as the boom that Spanish audiovisuals live and the fiction production of our country. As he explained and corroborated thanks to the support of data and statistics, fiction production in our country is a leading industry which exports worldwide. In addition,” he pointed out, “it is an intensive human capital industry that demands trained and prepared professionals and which offers paid jobs above standard wages in other types of sectors”.  For Grupo Secuoya’s CEO, the audiovisual sector is also impossible to relocate, which leads to “Spain will have a fundamental development pole in the city of Tres Cantos”.

The competitiveness of the Spanish sector (lower costs, innate talent and an international projection endorsed by titles such as “La casa de papel” and “Elite”)  it is also part of a revolution in the way content is consumed motivated mainly by the arrival of OTTs. “The Spanish-language productions of OTTs and telecommunications companies such as Netflix, Movistar, Amazon Studios and HBO have gone from 11% two years ago, to 31% in 2018. This has also had beneficial effects in terms of Spain’s decrease in global piracy ranking,” he explained.

Jimeno also pointed out, that in a consolidated market, we could talk about the production of 72 series a year in our Country (in 2015, 38 were produced), which will generate “more than 18.000 job positions, all this without taking in account the indirect impacts or induced in a market as important for the GDP (Gross Domestic Product) as Tourism. Finally, Mr. Jimeno noted that in the next two years, Secuoya Studios, owned by Grupo Secuoya and home to Netflix’s first production hub in Europe will host five thousand professionals working simultaneously “with the direct and indirect development that will mean for the city of Tres Cantos,” he said.