Secuoya is to broadcast the Freestyle and Snowboard World Championships to more than thirty countries, also available in real time on the app which launches today. 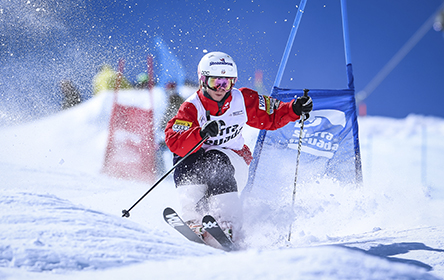 Secuoya offers a complete/ 360o degree service that includes broadcasting, social listening content and a free mobile app that provides a full range of the events, live videos and event statistics. Three dozen cameras, hundreds of hours of live events, 194 camera uses, sixty technicians and more than 18 kilometres of fibre for the production, completion and live retransmission of the high-definition audiovisual signal from Sierra Nevada 2017 to more than thirty countries.

On March 7th, the Freestyle and Snowboard World Championships and Grupo Secuoya, responsible for its production, execution and international retransmission, will present complete coverage at the Granada station in Sierra Nevada. This 360o service includes broadcasting, a signal that will retransmit to more than thirty countries (some of which will be personalised), host broadcasters, social listening content and a mobile app, developed by the digital team at Secuoya Corporate, where you can follow the Championships live.

The presentation of the app, which took place at the Delegation of the Andalusian Government, was attended by the General Secretary of Sierra Nevada 2017, María José López and Secuoya’s president, Raúl Berdonés. “At Secuoya we have found the perfect partner for major sporting events: they are the main reference point for production, execution and distribution of major events for competence and the technological solutions that they provide”, explained María José López.

From 6th to 9th March, Secuoya will take on the challenge of bringing coverage to twelve competitions in 6 different disciplines including Moguls/Dual Moguls, Cross, Slope, Halfpipe, Aerials/Big Air, PGL/PGS in both male and female categories. Over the course of the World Championships, which last for two weeks, Secuoya will provide over sixty technicians, have up to 28 cameras with 194 different uses, an HD mobile unit of 16 metres by 5 prepared for a multiple-camera setup and will use more than 18 kilometres of fibre to bring coverage of this exciting winter sporting event. More than one hundred hours of live coverage and a television signal to more than thirty countries, personalised for some channels.

Hold the Championships in your hands
Today, as part of its 360o service, Secuoya presented the mobile app for the Freestyle and Snowboard World Championships, developed by the digital team at Secuoya Corporate. Through this new app you can follow every moment at Sierra Nevada 2017. An application for iOS and Android, it offers full coverage of the events at the Championship. With a live video channel and the opportunity to consult statistics of the results of all competitions, it is an agile and dynamic tool that provides detailed information related to the World Cup. This free application is distributed through AppStore and Google Play.

Secuoya, who was awarded the public contest that was launched last year, enhances its profile as one of the leading companies in the international retransmission of major events. “Contests like this are a perfect example of transparency and equal opportunities with regard to sports television broadcasting,” says Berdonés, “who don’t always favour open competition when it comes to audiovisual production rights of other sporting events. That is why we have submitted a complaint to the National Markets and Competition Commission (NMCC) to appeal against a contract which binds the National Professional Football League with a company for the audiovisual production of the signal of all matches and the news summaries. We feel that this barrier makes it impossible for other companies within the sector to compete and violates competition regulations. In Spain there is not just one company capable of producing high level sporting events, there are more of us, and the event we present today and our presence here demonstrates this,” he concludes.