Shooting of “Algo que celebrar” (Something to Celebrate): “Doble Filo” puts the Spanish family in the eye of the camera 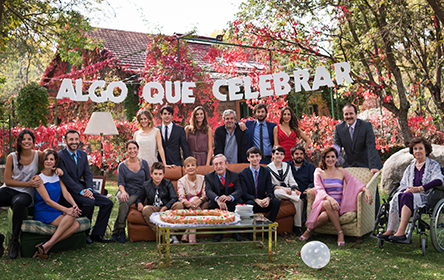 Stepfamilies, traditional families, mixed marriages, lovers who get together again and siblings arguing. The great Spanish family is all of these, one at a time. They are all represented in the Navarro clan; the stars in ” Something to Celebrate “, the new fiction series by Doble Filo for Channel Antena 3. The series, currently being shot, starts with a very original approach: to observe the evolution and revolution of a family, no different to any usual one, through the important events that unite them on specific dates: weddings, baptisms and communions, yes … but also birthdays, Christmas, funerals and all other occasions that are marked in the family calendar.

The series, starring Luis Varela and Elena Irureta as the patriarchs of the clan; Alejo Sauras, Norma Ruiz, Cristina Peña and Ricardo Castella playing the four children; Ana Rayo, Carlos Chamorro, Kimberly Tell and Raul Fernandez as brothers and sisters in law and the young actors Alvaro Fontalba, Daniel Aviles, Maximo Perez and Paula Shepherd as the grandchildren. Additionally, Julieta Serrano who plays the great-grandmother Maria, also takes part in “Something to Celebrate”. Alicia Rubio and a substantial group of episodic actors round off the cast.

The series, which features Amparo Miralles and Mariano Baselga as executive producers, is created by Pablo Aramendi, Luis Moya, Emilio Diez and Mariano Baselga. It is based on an original idea which also involved Paula McCoy and Dario Lopez. The script writers are Alberto Ucar, Jorge Lara, Sara Antuna, Esther Morales and Serrano Curro, as well as Pablo Aramendi, Luis Moya and Emilio Diez. Álvaro Fernández Armero is in charge of directing, with the participation of Manuel Tera and Inmma Torrente. The production manager is Miguel Angel Larraya.