#RevoluciónTEN: on March 29 the transformation begins 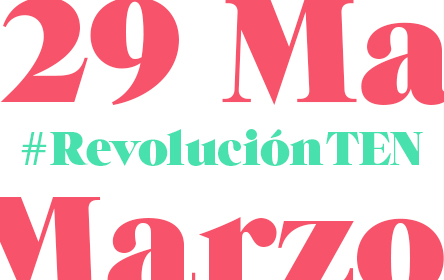 Under the hashtag #RevolutionTEN, DTT television has been preparing the master plan for what is to be its greatest transformation for the channel, viewers and for television in this country.

From the Latin revolutum, Revolution means a radical change or transformation from the immediate past. On the 29th March, a month before celebrating its first birthday, TEN will begin its own uprising as a prelude to the great changes that the chain will make as of that same Wednesday.

An unprecedented effort with regard to its in-house production (seven in-house production premieres within only a few days), a total commitment to the most successful third-party productions on the planet, a television model that will revolutionize the way that we relate to television and to the viewer and, above all, a transformation of content which changes the way in which a viewer watches television.
The search for useful entertainment as a vehicle for change is due to the channel’s new philosophy of seeking to offer viewers rich and entertaining experiences.

On 29th of March, the new TEN will seek to involve the viewer in this revolution, a change that will be the birth of a new form of making television, designed to be enjoyed by creating a relationship between sender and receiver.
Can a television change your life? At TEN, we think so, and so for this we have created a series of unprecedented formats that will come to life on the programming grid/schedule, providing us with the necessary tools to change our lives. Lifestyle, gastronomy, sport, psychology, entertainment, leisure, confidence and personal development will be the milestones on which the new TEN will be built.