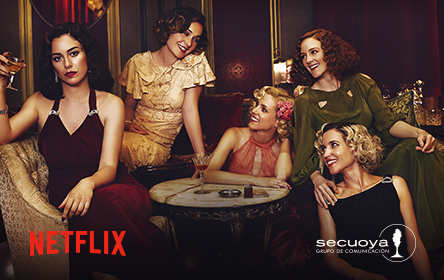 Netflix, the world’s leading internet entertainment service, has announced the establishment of its first European production hub in Madrid.

The production hub will be located at Ciudad de la Tele (TV City), a new 22,000 m2 campus in
Tres Cantos, Madrid, being developed and managed by Grupo Secuoya, a leader in
audiovisual production services. It will be a central facility for Netflix’s growing slate of
Spanish-language original content over the coming years including new and existing titles
produced by Netflix, as well as series and films made by production partners for Netflix.
As part of the multi-year partnership, Grupo Secuoya will provide facility management and
other services to Netflix, including being the exclusive production services partner for
projects based at the Ciudad de la Tele campus. Netflix will take occupancy of three 1,200 m2
sound stages from September, with the option to occupy additional space as construction
completes.
The creation of the production hub reflects Netflix’s deepening investment in Spain, with over
13,000 cast, crew and extras working on 20 Netflix original productions across the country
this year. Spanish titles coming soon to Netflix include season 3 of Las Chicas del Cable on
September 7th and Élite, a young adult drama coming soon, with titles currently in production
including Isabel Coixet’s new original film Elisa&Marcela and The Alcásser Murders, a new
original documentary series.

Netflix recently announced an overall deal with Álex Pina, the creator of the worldwide
phenomenon La Casa de Papel (Money Heist), the most watched non-English language show
on Netflix. Netflix is also investing significantly in licensed and co-produced titles created by
Spanish broadcasters and producers. This includes a recent agreement for first-option
access to drama series from Atresmedia, with Fariña and La Catedral del Mar among the
upcoming titles launching on Netflix globally.

Erik Barmack, Vice President of International Originals at Netflix, said:“Spain has a rich
heritage of innovative, immersive content creation and we are excited to strengthen our
investment in the cultural heartland of Madrid. From San Sebastián to Santiago de Chile and
Toronto to Tokyo, Spanish-language content is savoured by Netflix members across the
world. The establishment of our first European production hub will create new opportunities
for Spain’s incredible creative talent, as well as demonstrating our commitment to the
production of original content throughout Europe.”

Raúl Berdonés, Presidente, Grupo Secuoya, said: “We are delighted that Netflix has chosen
Ciudad de la Tele as the location of its first European production hub. Netflix sets a
world-class standard in its production process and the decision to create a production hub in
Madrid is proof of Spain’s leadership in the audiovisual industry, as well as the depth of its
talent pool. Grupo Secuoya is delighted to partner with Netflix to support the production of
Spanish-language series for the world.”
María Peña, CEO of ICEX, the Spanish Government Agency for Trade and Investment
Promotion, said: “We very much welcome Netflix’s decision to establish its first European
production hub in our country. We are sure this project will contribute strongly to positioning
Spain as a competitive location for the global entertainment industry. In that respect, it will be
entitled to our full support.”

About Netflix
Netflix is the world’s leading internet entertainment service with 130 million memberships in
over 190 countries enjoying TV series, documentaries and feature films across a wide variety
of genres and languages. Members can watch as much as they want, anytime, anywhere, on
any internet-connected screen. Members can play, pause and resume watching, all without
commercials or commitments.
Netflix’s European, Middle East and Africa headquarters is located in Amsterdam, the
Netherlands. Netflix is investing in creating original content throughout the region, with
projects completed or underway in countries including Denmark, France, Germany, Italy,
Jordan, the Netherlands, Poland, Spain, Sweden, Turkey, the UK and more.

About Grupo Secuoya
Grupo Secuoya is an audiovisual leader in Spain, developing, creating and producing a wide
variety of audiovisual content and providing innovative audiovisual technical solutions. More
than 2,000 media professionals are ready to face any challenge and provide solutions to
Grupo Secuoya customers. The Group has been able to diversify within its value chain,
providing services to production companies, TV Channels and OTTs, enhancing synergies
and occupying growing niches in the sector. Grupo Secuoya has a presence in Colombia,
Peru, Mexico and Chile in the Latin American region, and has also a presence in Middle East.

About Ciudad de la Tele
Ciudad de la Tele is the new audiovisual campus situated in Tres Cantos, Madrid, being
developed and managed by Grupo Secuoya. The campus will consist initially of 22,000 m2 of
production spaces, included five stages between 1,200 m2 and 1,500 m2, and with future
expansion could reach more than 100,000 m2. Each stage is completely independent with its
own annex spaces of make-up, tailoring, production offices and more. The campus is
equipped with the latest technical technology in capture, post-production and finishing, as
well as an auditorium with capacity for more than 250 people. Ciudad de la Tele allows a full
service from capture until the finalisation of the audiovisual project.