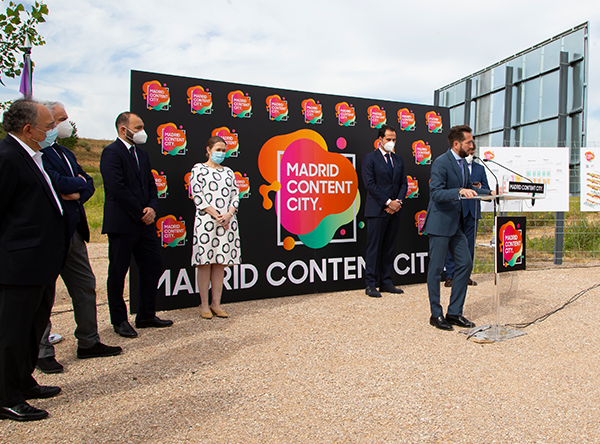 A production hub, filming services, university campus, office space and a food court and retail area are among some of the facilities housed in the 140,000 m2 that comprise Madrid Content City. Today, the foundation stone has been laid for the phases II and III of the above mentioned complex at an event presided by Raúl Berdonés, Grupo Secuoya´s president. Also in attendance was Carlos Rubio, lead architect for the project as well as Ignacio Aguado, Comunidad de Madrid´s Vicepresident, Marta Rivera de la Cruz, Councillor for culture, Manuel Giménez, Counsellor for Economy, Jesús Moreno, Mayor of Tres Cantos and Miguel Garrido, CEIM president.

Madrid Content City is an initiative carried out by Roots, a group of companies funded fully by Spanish capital that aims to be the leading Spanish group managing audio-visual sites worldwide. It is managed by Secuoya, a leading group in the creation, production, distribution of audio-visual content and subsidizing of television operative areas.

While addressing the attendants, Raul Berdonés remarked that “tax incentives to international production have been instrumental in appealing international production companies to film in Spain due to the current working conditions. Moreover, they believe it will result in the increase of international filming in our country, with everything that entails and the impact it would have on the economy both directly and indirectly”.

Ignacio Aguado, Comunidad de Madrid´s Vicepresident highlighted the importance the audiovisual sector has in order to rebuild the region after the COVID19 health crisis. “It is a sector that provides visibility to the both the Community of Madrid and the country as well as generate wealth and economic activity. We need the audiovisual industry to create jobs”.

Additionally, Jesús Moreno, the Mayor of Tres Cantos, described the event today as “a moment that calls for hope, joy and anticipation after the sad times we have endured all around Spain”.

Madrid Content City consists of the merger of talent and companies with the latest technology. Moreover, it makes the case for sustainability meeting the highest environment standards. Currently, Madrid Content City´s first phase is already functioning with 22.000 square metres. The works start now for hase II and are expected to be done by early 2021, while phase III will be divided in two parts, the first one comprising the university and retail area, will be finished by September, 2021. By late 2022, the remaining facilities will be completed. Education, trade, companies, retail and leisure area will converge, enabling Madrid to become the focal point for the industry and business development. This ambitious business complex will be completed with the university building, student dorms, filming studios, office space, warehouses, retail area, a gas station and restaurants, accounting for a 102 million euro investment.

Now that the first phase has been completed, the project is made up of 5 fully finished and operative studios, three of those 1.200 square meters each and the other two, 1.200 square meters each. However, once phase II is finished, the number of sets will increase to ten. One new 2.000 square meter set and four additional 1.500 square meter ones will mean that filming for ten major productions could be done concurrently, simultaneously and independently. Consequently, the complex in Tres Cantos would become Europe´s second largest production center, followed by Cinecittà (Rome), Babelsberg (Germany) and Cite du Cinema (France) and only surpassed by Pinewood (UK).

Standing at 14 meters high, the highest studios in Spain, they provide an available space on par with the best studios in Europe and United States. Additionally, they meet the highest noise cancelling and noise insulation standards. Regarding connectivity, it is worth mentioning that optical fiber ensures and guarantees a transmission of information in 4K HDR. Within the facilities, there are integrated dressing rooms with natural sun light and fully equipped with TV, bathroom, shower and lounge area. They are outfitted with the electric power necessary to meet any high- level production´s needs. Among other services available at the facility, there is waste management, health aid area, catering services, parking, office space, restaurants and an auditorium with seating capacity for 250 people.