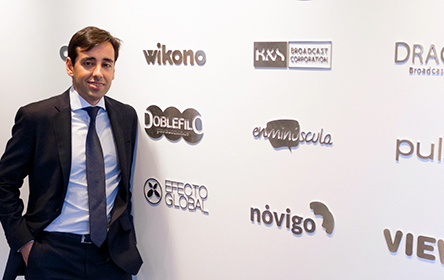 Before this, he held the position of Sales and Acquisitions Director of Grupo Ganga.

Grupo Secuoya reinforces its management structure with the incorporation of José Miguel Barrera as the new head of the group’s International Division. From his new position, Barrera will command all Secuoya’s actions in the international sphere in as far as development, new opportunities, distribution and acquisitions are concerned.
With a wide trajectory in cinema and television, Barrera is specialised in the selection and negotiation of fiction and entertainment formats, as well as the distribution of titles all over the world. Sales director for El Retiro Producciones for three years, and international sales and acquisitions director for Grupo Ganga until he took up his new responsibility, he was in charge of the acquisition, development and distribution of entertainment and fiction formats.

With Barrera joining Secuoya, the group confirms its international position, which is crucial in this development phase of the company, with one of the most solid profiles of the audio-visual panorama. The group’s strategy reinforces the markets where it is already present (Peru, Colombia, Chile and United States), reasserts the group’s position, and develops new alliances in other countries. Building bridges and exporting the group’s success model to other countries are the pillars of the company in this division.
Jose Miguel Barrera graduated in Political Sciences at the UCM in Madrid. He has an MBA at IESE-University of Navarra and also two master degrees in Television Production and Management of Entertainment Contents. He has also completed a Degree in Television and Cinema at the Escuela Cinematográfica y del Audiovisual in Madrid.