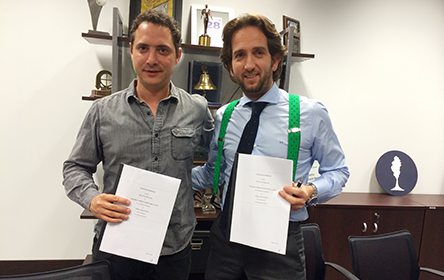 From the union of Grupo Secuoya and Fabula, “Fabula Television” has been born and is destined to become a leader within the Chilean market with the backing and support of its Spanish staff

According to the agreement, Secuoya will offer its new partner the hands-on expertise of a company that has managed to prosper in Spain and export this successful model, which covers the audiovisual market in a transversal manner. Meanwhile, Fabula´s experience, reputation and solvency as one of the most awarded producers in the Latin American market will assist Grupo Secuoya, “To enter Chile through the great door,” explains its President, Raul Berdones. Fabula is the only Chilean producer that produces for HBO and is a brand with its eyes set on the film and advertising industries and is known for its excellent reputation in the production of television content. Berdones continues,“As a Spaniard,the fact that Fabula clearly recognises the talent and expertise of a group like Secuoya fills me with satisfaction. This agreement is the paradigm of the bridges that are necessary between Europe and Latin America in our sector.” This agreement will see the distribution of Secuoya´s wide catalogue of Content Distribution in Chile and Latin America. This covers all genres from fiction, entertainment, factual to documentary styles and they are produced by either the group´s companies or other companies, Spanish and foreign. Fabula Television´s team of staff will be made up of Spanish members who will contribute their expertise to this new production. Thus, Secuoya is committed to this new project which forms part of the internationalisation policy in which the group is involved.

With a decade´s worth of experience, Fabula is a leading brand in Chile, Latin America and is one of the most experienced producers in the US market. Rewarded and recognised, the company owned by the brothers, Pablo and Juan de Dios Larrain has combined content production for television and cinema, being in fact one of the country´s forces in cinema. According to Juan de Dios Larrain, “This association is part of a natural growth for the producer, where having a partner like Secuoya is the key to addressing the local market.”

After entering the capital of Imizu Producciones, one of the largest producers in Peru and the opening of Secuoya USA with headquarters in Miami, the group goes a step further in its internationalisation process by establishing an alliance with one of the most paradigmatic Chilean producers. Grupo Secuoya´s international strategy has a clear objective: to be able to compete globally. To do so the broadcaster has created an attractive catalogue, which is proving to be successful in all international markets and seeks the support of partners in each country. Therefore the Secuoya network consists of associated producers, partners in each field, which will open the doors to the local market. Following the agreement signed in Chile, Secuoya´s future plans include operations in Colombia, Mexico and European countries. They aim to expand the network of producers and enhance their productive capacities by joining the best professionals in each country and creating partnerships to present large and important catalogues for each of the countries.

Founded a decade ago by the brothers Pablo and Juan de Dios Larrain, Fabula has managed to reach the most important heights within worldwide cinema. This includes competing for an Oscar with the film “No”. With internationally renowned names such as “Tony Manero” and “Gloria”, Fabula not only excels in cinema but it has also produced two seasons of “Profugos” for HBO Latin America, among other achievements. The new film by Pablo Larrain “El Club” will be released in the next Berlin Film Festival, 2015.