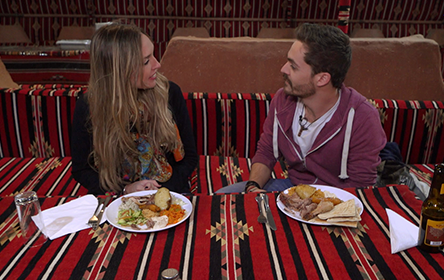 Secuoya Contenidos releases a new season of “Españoles en el Mundo” this Tuesday, new episodes filmed before the Covid-19 pandemic in which reporters travel to meet the Spaniards who live in the most remote places of the planet. A tribute to life as it was until recently, and a plea of hope for the coming times that will begin in Jordan and that will travel more than 190,000 kilometers around the planet.
The reporters and cameras will travel by land, sea and air. Four trips around the world to offer the testimonies of Spaniards of all ages, professions and social levels in the five continents, to know their daily life and the historical, natural, gastronomic and cultural richness of their new adopted countries.
A season with new destinations and a renewed spirit of curiosity towards the daily life and secrets of each country visited by the reporters Antonio Montero, Arantzazu Fuertes, María Pérez, Gorka Vallejo and Lourdes Gordillo. From their hand, the viewers will have the opportunity to travel to Jordan, first destination, to discover the incredible treasures of Petra and the majesty of the Wadi Rum desert; to travel through the unknown lands of Newfoundland and Nova Scotia; to revive the Spanish legacy still present in Equatorial Guinea; fly over the whimsical forms of Cappadocia and Pamukkale in Turkey; delve into the ancient customs of Rajasthan in India; or discover the historical past of the German city of Nuremberg or the Moravian region in the Czech Republic, among other destinations.
With the broadcasting of this new season of the programme ‘Españoles en el Mundo, which started in 2009, RTVE renews its commitment with the Spaniards who live abroad and with the viewers who continue to place their confidence in the programme that best brings them closer to daily life in the most surprising places on the planet. Faraway destinations and some better known ones for a new season produced by RTVE in collaboration with Secuoya Contenidos.
With the broadcasting of this new season, “Españoles en el mundo” becomes one of the most veteran spots on RTVE. During the 11 years of broadcasting and with more than 300 programmes, reporters and cameramen have visited more than 150 countries and more than 1,000 cities, with nearly five million kilometres travelled.
Grupo Secuoya © 2023 | Cookies policy | Disclaimer | Privacy Policy | Whistleblower Channel