Secuoya Group’s DTT channel will begin broadcasting at 23:59 on the 28th of April 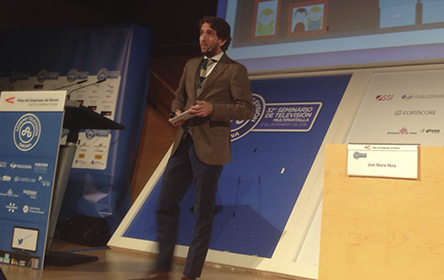 Raúl Berdonés, president of the Secuoya Group, made the most of his presence at the 32nd Aedemo Multiscreen Seminar to speak about the “New Television” and the pivotal elements of the latest DTT channel brought by the company.

During his intervention in this event, held in Gerona as from yesterday until Friday and organised by the Spanish Market Studies Association, Berdonés said that the new channel would be broadcasting regularly as of 28th April at 23:59 hours with a revolutionary inclusive programming for all the family and aimed at a commercial audience, where the intention is to respond to the demands of an audience seeking entertainment, current affairs and contents related to the needs of the new society.

With a DNA formed by surprise, innovation and creativity, the channel appears as a novel television seeking to occupy that differential factor not offered by the rest of the competition.

The proposal put forward by Secuoya has a marked inclusive character, designed for a very broad objective audience made up of teenagers, young adults and adults (13-54). It is noteworthy that this age group consumes 50% of the daily minutes of television viewed and this means 60% of the Spanish population.

Therefore, aware of the synergy that must exist between television and brands, Secuoya’s television seeks an urban audience, medium to high class, and the most attractive in advertising terms for advertisers. Its TV programming has been created to address the greater part of the population that watch television at any moment. It is adapted in quantity and quality to the end client, the family spectator.

The Secuoya Group’s offering presents television genres with particular attention to “factual” and “entertainment”, without forgetting “docu-realities” or documentaries, and looking ahead into the future: bringing in-house production to the forefront.

Mornings will offer a noteworthy array of contents evolving around “lifestyles”. Fashion, beauty, health, nutrition or sport will have their space in this “branded content” container.

After the morning slot, the early afternoon section will contain spaces centred on women (dating, factual…). The channel seeks to careen slightly towards this profile to be more competitive in a framework dominated mostly by masculine offerings.

The afternoon will focus on content for all the members of the family, with comedy as a cornerstone (the most inclusive genre). Its early prime time (20:30-22:30) intends to become the most creative and innovative window of the channel, with first-time releases of programmes never before seen in Spain. Originality will be the mainstay of this slot. Entertainment and factual programmes will lead the offering, with unprecedented content.

As far as the news bulletins are concerned, the channel tends towards a model similar to a Breaking News style, with regular bulletins, scattered around the programming schedule offering the latest headlines in a fast and concise manner.

Secuoya’s commitment is with a white, inclusive, modern Television in line both with the spectator that demands new ways of watching television and publicity requirements.