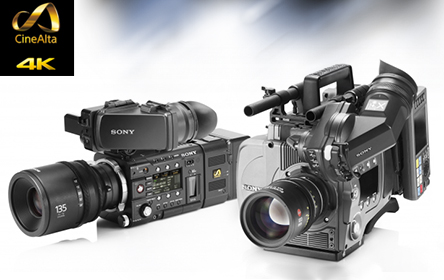 Drago Broadcast Services (DBS), one of Grupo Secuoya’s companies that specializes in outsourcing for television channels and in finding technical solutions for producers, has just bought four Sony F55 CineAlta cameras.Drago Broadcast Services has thus strengthened its position in the market, and offers new angles on digital production.

This particular camera model can shoot spectacular images thanks to its Sony 4K image sensor of 8,9 megapixels of effective resolution. It is designed for high-end television production, advertising and digital cinema with multi-codec support, and offers several recording formats, including HD/2K/4K in SxS memory cards and RAW 2K/4K 16-bit, which allows for 120 fps when using an specifically designed external recorder.

The CineAlta F55 camera is particularly small, light and modular and has many features making it highly versatile. It allows for the use of different viewfinders inclidng the revolutionary optional viewfinder OLED DVF-EL100, among others. It can also let you attach a PL or FZ mount and fixed camera lenses, and even second generation Sony PL lenses.

These cameras put Drago Broadcast Services at the forefront of audiovisual production, offering new creative possibilities, both for HD and for 2K and 4K. This model offers superior color sampling quality, with high contrast in cropped details and the reproduction of color without sound.