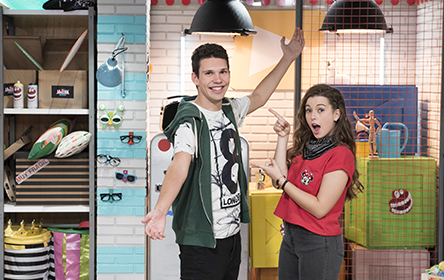 The new installment of this most entertaining programme is full of surprises, including a new host: Paula Sánchez.

Next Friday, 6th October, at 9.15pm, Disney Channel premieres JAJA SHOW: SUPER LOL. This new edition of 12 programmes has kept the usual home videos with slip ups and gags, the challenges, and the essence of the original version of the programme, but introduces a couple of changes: the participation of children on set as well as fun and adventurous Paula, a new sidekick for Chim (@MyChimyK).

In the course of each program, produced by Secuoya Contenidos, both presenters and children will star in a fun competition, where videos will be the main theme on which the games are based. During the different challenges, the children, divided into two groups, will help the presenters to rise to victory in order to avoid falling into the dreaded “gunk”: a slimy shower that the presenter and the team who have won the least amount of tests during the programme will have to bathe under.

Classic games such as “There’s Trouble Brewing”, “Don’t Laugh”, “60 Crazy Second of Chim”, “Wanted”, and “How Did This Happen?” will continue to form part of the programme. New challenges will also be incorporated that will test the shrewdness and attention span of the contestants, such as the game “Usual Suspects” in which contestants will have to guess, by only seeing the faces of 5 “suspects” who is responsible for different crimes. Another new addition is the game “Paula-lo” where the presenters and their team must guess the way in which a funny video ends.

Furthermore, JAJA SHOW: SUPER LOL will continue to include the funniest sets of videos on television, with brilliant remarks by the two usual commentators, Fernando Costilla and Paco Bravo, iconic narrators of programmes such as “Humor Amarillo” or “Pressing Catch”. Likewise, fans of the programme can continue to find lots of exclusive content through the Disney Channel App.

About Disney Channel:
Disney Channel has evolved, responding to new ways of viewing its audience. Through its ecosystem (TV, DC APP & Services on demand), Disney Channel offers a new way of watching television, how, when and where its audience decides, with complementary contents that invite viewers to move between different social networks to obtain a unique, richer television experience that is more up to date. This innovative television angle keeps the historical values of the brand while nourishing the growing Disney repertoire, guaranteeing both the quality of the content and its suitability to children. The different mediums also provide an excellent way to reach children aged 5 to 9, as well as pre-teens and, of course, families looking to connect together in front of the television.